Knowing Django will put you in a good position to use ASP.NET MVC - you'll already know about the roles of Models and Views etc.

Python is generally a higher level language than C# so you might find that it can be less powerful to use. On the whole I'd say there isn't much between them though.

The best advice I could give would be to read Pro ASP.NET MVC Framework (Steve Sanderson). This book goes beyond simply teaching the reader about the features of the framework but clearly demonstrates them in context and gives clear examples of what could be considered 'best practice' (subjective, but I largely agree with the techniques he advocates).

I'm actually going the inverse at the moment. I've been using ASP.NET MVC for a couple of years but am moving towards Django for some upcoming projects.

Steve Sanderson describes an example of pagination support in his book Pro ASP.NET MVC 3 which I highly recommend (although it shouldn't be long until the next version is released).

He describes a product controller (listing pages of products) as:

A query to the action may then be in the form:

(or whatever routing you require).

This view model would then be:

And the PagingInfo model would be:

You can then use this paging information to display the information in your view as required.

You can follow some video tutorials on pluralsight. It's not that expensive and one month is quite enough.

There are also plenty of books that may help you during your learning process. I would suggest this one Pro ASP.NET MVC 3 Framework 3rd Edition 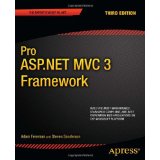 The official site for asp.net mvc has also some great tutorials

Check out a great book by Steve Sanderson - Ive used the previous two editions to get me upto speed with MVC.

If your looking to use Entity Framework then I can also recommend;

I would suggest you get a copy of either Pro ASP.NET MVC 3 Framework, Third Edition or Pro Asp.Net Mvc 4. Either way, i usually do a blank solution and then add 3 projects like Something.WebUI, Something.Domain, Something.UnitTests (Only if you want to write tests, highly recommended).

Ideally, in a perfectly TDD environment you would have tests for absolutely everything in your code - but some may consider that dogmatic and you don't see a need to test your code-first-generated-database, so don't do it :) . You're the developer, do what you want.

I understand your feelings on the above, but if you want to develop in a true TDD style, you need to write a test before you code anything, then code to get the 'green light' on the test.

You will have a lot of tests, but you will have a very sound application as long as you are diligent about maintaining those tests.

Keep a few things in mind when using TDD with MVC (or likely any development architecture):

As far as writing tests specifically for MVC actions, I highly recommend this tutorial from MSDN and this book: Pro ASP.NET MVC 3 Framework (which is an overall great resource for MVC3, including TDD for MVC3) by Freeman and Sanderson.

You can use the partial validation technique to modify the validation results. This example will discard any errors for the Email field.

and apply this attribute to your Edit Controller.

I learnt this technique from Steve Sanderson's Pro ASP NET MVC 3. He uses the technique to validate a model that has required fields but the data entry is a multistep wizard. If the value has not been returned in the form post, he removes the errors for that property.

I think making this field nullable and also making it Required is the best shot for now. As the book states, . Otherwise, you can write your own attribute, make the validate method return false when passed in value = default(T)