No, the code should not (necessarily) give a segfault. A segfault occurs when you attempt to access a virtual memory page that is not allocated to your process.

The "heap" or "free store" is a region of virtual memory pages owned by your process. The malloc() API sub-divides this region into blocks and returns a pointer to the block.

If you address beyond the end of the block to which you have a pointer, you will usually access memory that is part of the heap, but not part of your allocated block. In this way, you can corrupt other heap blocks or even the data structures which malloc() uses to define the heap.

For more information on heap corruption, and methods to detect it in the debug version of your code, this is a great book: 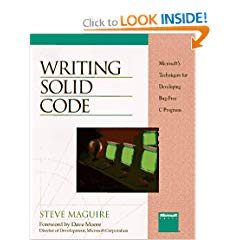 An addendum for the pedantic: In rare cases, by accessing memory beyond the end of a heap block, you may access memory that is not part of the heap. In these cases, you may get the segmentation fault you expected. You might also corrupt some other data structure than the heap. It's really a matter of chance. However, the heap itself is very large compared to typical heap blocks, so 99% of the time code such as your example will corrupt the heap. The example you provide falls into that 99% case.

Original Thread
by anonymous   2018-03-12
There is a book, [Writing Solid Code](https://smile.amazon.com/dp/1556155514/), that covers this sort of stuff in detail. There are those who excoriate the book; I think it is quite a useful read, though it has to be recognized as being written soon after the original standard was released (1993), so it has some slightly archaic attitudes to what we now take for granted. If you can find a copy in a library, it might be worth a read. The appendices include some memory checking allocation code not a million miles removed from what's under discussion here.
Original Thread
by anonymous   2017-08-20

Application Verifier combined with Debugging Tools for Windows is an amazing setup. You can get both as a part of the Windows Driver Kit or the lighter Windows SDK. (Found out about Application Verifier when researching an earlier question about a heap corruption issue.) I've used BoundsChecker and Insure++ (mentioned in other answers) in the past too, although I was surprised how much functionality was in Application Verifier.

Electric Fence (aka "efence"), dmalloc, valgrind, and so forth are all worth mentioning, but most of these are much easier to get running under *nix than Windows. Valgrind is ridiculously flexible: I've debugged large server software with many heap issues using it.

When all else fails, you can provide your own global operator new/delete and malloc/calloc/realloc overloads -- how to do so will vary a bit depending on compiler and platform -- and this will be a bit of an investment -- but it may pay off over the long run. The desirable feature list should look familiar from dmalloc and electricfence, and the surprisingly excellent book Writing Solid Code:

Note that in our local homebrew system (for an embedded target) we keep the tracking separate from most of the other stuff, because the run-time overhead is much higher.

If you're interested in more reasons to overload these allocation functions/operators, take a look at my answer to "Any reason to overload global operator new and delete?"; shameless self-promotion aside, it lists other techniques that are helpful in tracking heap corruption errors, as well as other applicable tools.

See Kernighan & Pike 'The Practice of Programming' for a lot of relevant discussions. I also think Maguire 'Writing Solid Code' has relevant advice to offer, for all it is somewhat dated. However, you should be aware that there are those who excoriate the book. Consequently, I recommend TPOP over WSC (but Amazon has WSC available from $0.01 + p&p, whereas TPOP starts at $20.00 + p&p -- this may be the market speaking).

Actually, the last of those is equivalent to a call to free(). Read the specification of realloc() very carefully, and you will find it can allocate data anew, or change the size of an allocation (which, especially if the new size is larger than the old, might move the data around), and it can release memory too. In fact, you don't need the other functions; they can all be written in terms of realloc(). Not that anyone in their right mind would do so...but it could be done.

The malloc function allocates space for an object whose size is specified by size and whose value is indeterminate.

The malloc function returns either a null pointer or a pointer to the allocated space.

That's a pretty explicit 'it works like free()' statement.

However, that MacOS X 10.5 or BSD says anything different reaffirms the "No-one in their right mind" part of my first paragraph.

The treatment of null pointers and zero-length allocation requests in the definition of these functions was in part guided by a desire to support this paradigm:

This coding style, not necessarily endorsed by the Committee, is reported to be in widespread use.

Some implementations have returned non-null values for allocation requests of zero bytes. Although this strategy has the theoretical advantage of distinguishing between “nothing” and “zero” (an unallocated pointer vs. a pointer to zero-length space), it has the more compelling theoretical disadvantage of requiring the concept of a zero-length object. Since such objects cannot be declared, the only way they could come into existence would be through such allocation requests.

The C89 Committee decided not to accept the idea of zero-length objects. The allocation functions may therefore return a null pointer for an allocation request of zero bytes. Note that this treatment does not preclude the paradigm outlined above.

A program which relies on size-zero allocation requests returning a non-null pointer will behave differently.

A new feature of C99: the realloc function was changed to make it clear that the pointed-to object is deallocated, a new object is allocated, and the content of the new object is the same as that of the old object up to the lesser of the two sizes. C89 attempted to specify that the new object was the same object as the old object but might have a different address. This conflicts with other parts of the Standard that assume that the address of an object is constant during its lifetime. Also, implementations that support an actual allocation when the size is zero do not necessarily return a null pointer for this case. C89 appeared to require a null return value, and the Committee felt that this was too restrictive.

C89 explicitly says: "If size is zero and ptr is not a null pointer, the object it points to is freed." So they seem to have removed that sentence in C99?

Yes, they have removed that sentence because it is subsumed by the opening sentence:

The realloc function deallocates the old object pointed to by ptr

There's no wriggle room there; the old object is deallocated. If the requested size is zero, then you get back whatever malloc(0) might return, which is often (usually) a null pointer but might be a non-null pointer that can also be returned to free() but which cannot legitimately be dereferenced.

For a platform-specific solution, you may be interested in the Win32 function IsBadReadPtr (and others like it). This function will be able to (almost) predict whether you will get a segmentation fault when reading from a particular chunk of memory.

Note: IsBadReadPtr has been deprecated by Microsoft.

However, this does not protect you in the general case, because the operating system knows nothing of the C runtime heap manager, and if a caller passes in a buffer that isn't as large as you expect, then the rest of the heap block will continue to be readable from an OS perspective.

Pointers have no information with them other than where they point. The best you can do is say "I know how this particular compiler version allocates memory, so I'll dereference memory, move the pointer back 4 bytes, check the size, makes sure it matches..." and so on. You cannot do it in a standard fashion, since memory allocation is implementation defined. Not to mention they might have not dynamically allocated it at all.

On a side note, I recommend reading 'Writing Solid Code' by Steve McGuire. Excellent sections on memory management.

In Writing Solid Code, Steve Macguire's advice is to prefer distinct functions (methods) for specific situations. The reason is that you can assert conditions that are relevant to the specific case, and you can more easily debug because you have more context.

An interesting example is the standard C run-time's functions for dynamic memory allocation. Most of it is redundant, as realloc can actually do (almost) everything you need. If you have realloc, you don't need malloc or free. But when you have such a general function, used for several different types of operations, it's hard to add useful assertions and it's harder to write unit tests, and it's harder to see what's happening when debugging. Macquire takes it a step farther and suggests that, not only should realloc just do _re_allocation, but it should probably be two distinct functions: one for growing a block and one for shrinking a block.

While I generally agree with his logic, sometimes there are practical advantages to having one general purpose method (often when operations is highly data-driven). So I usually decide on a case by case basis, with a bias toward creating very specific methods rather than overly general purpose ones.

In your case, I think you need to find a way to factor out the common code from the specifics. The switch is often a signal that you should be using a small class hierarchy with virtual functions.

If you like the single method approach, then it probably should be just a dispatcher to the more specific methods. In other words, each of those cases in the switch statement simply call the appropriate Method1, Method2, etc. If you want the user to see only the general purpose method, then you can make the specific implementations private methods.

Two good source books for this sort of stuff are The Practice of Programming and Writing Solid Code. One of them (I don't remember which) says: Prefer enum to #define where you can, because enum gets checked by the compiler.