WHEN THE MOST TOXIC PEOPLE COME DISGUISED AS FAMILY, WHO CAN YOU TRUST?

Betrayal by blood cuts the deepest.

Teller’s found his ride or die girl. The light Charlotte brings to his life has touched the darkest parts of his soul. But a devastating secret from her past resurfaces to threaten their future.

Every truth can be erased with one lie.

When a sinister truth is exposed, it forces Charlotte to question everything about herself. Even whether she’s worthy of Teller’s love.

The darkest betrayals never come from your enemies.

With Teller’s love roaring louder than the lies, Charlotte can finally put her demons to rest. But has too much damage been done for her to prove her loyalty to the Lost Kings? 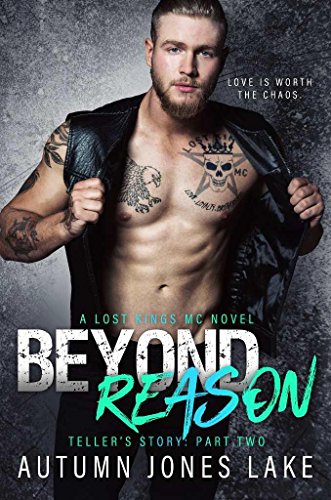 I received an advanced copy for review.

I have read all nine books in the series and I just can’t get enough of the series, the author, and the story line. This really is my favorite romance series out there. This book did not disappoint! If you haven’t read the first part of this duo, Beyond Reckless Book #8, please do that first. This was a page turner and I couldn’t put it down. I read the story in one night! It was totally worth the book hangover I had the next day. I couldn’t stop thinking about it! Autumn Jones Lake is a skilled author with a very loyal fan base. She writes a world you just wish you could crawl into and stay in forever!  It is intended for a mature audience.

Beyond Reason starts out where Beyond Reckless left off. Charlotte and Teller are moving forward in their relationship, she has given him a key to her apartment and her heart and he has declared her the one and only for him. He is ready to take the next step, however, Charlotte is hiding a huge secret that she fears will keep Teller from giving her the happily ever after she is dreaming of. Her Uncle Chuck is a member of the Work Knights MC, a friend of the Lost Kings, but is not acting so friendly lately. He has ordered Charlotte to stay away from Teller and she is scared of what might happen between the clubs if Teller finds out. She pushes Teller away in order to protect him from her uncle.

A tragedy happens and Charlotte is lost and shutting everyone out. Charlotte’s brother, Carter, finally intervenes and Teller refuses to let Charlotte be along in her time of need, despite the growing tension between both clubs. A series of events leads Teller to keep secrets from his club brothers and Charlotte in an effort to keep everyone safe. The conflict and tension finally come to a head and Teller is forced to reveal what he knows to his club brothers. Not all his brothers are 100% on his side but he stands his ground and his belief and trust in Charlotte no matter what the consequences. As the secret unfolds, the truth becomes more devastating than Charlotte was prepared for. She falls into a despair, but Teller is there to pull her out of it. This book does comes with a HEA.

I have never been team Teller. I wasn’t a fan of him in the other parts of the series but I have to say I was won over in this book. He became a totally different person (Character) than I had ever expected. He was loyal to the core to Charlotte and was willing to stand up for her and defend her honor through a situation that had happened years earlier before he had even knew her. I loved him for it.  He is defiantly a character you can never forget and wish would come walking into your life. I have to admit the ending surprised me a little because he was willing to give up something he said he never would for Charlotte. I found that the most surprising part and I think really the part that made me fall in love with him.

This book review is contributed by catherinepeel, please visit her blog for more book reviews.